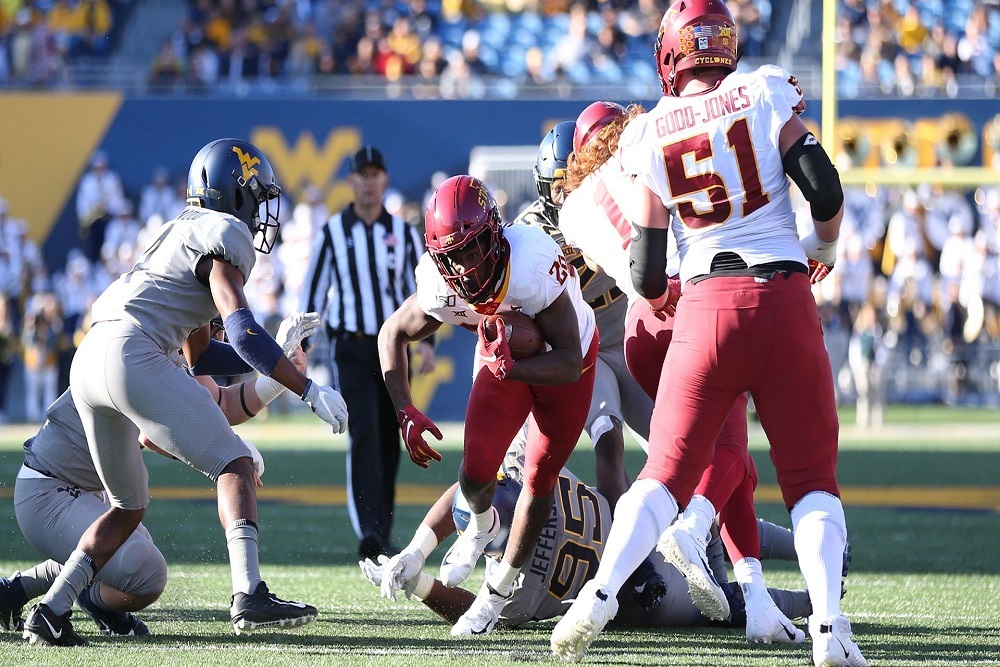 Freshman Breece Hall shouldered the Iowa State rushing attack in a 38-14 win over West Virginia on the road. Hall rushed for 132 yards and three touchdowns, which were both career highs for the Wichita, Kan., native.

On the other side of the ball, the Cyclone defense pitched a second-half shutout, stifling the Mountaineer offense. Iowa State held West Virginia to just 190 yards on the day and only 41 rushing yards. The Cyclones also forced three West Virginia turnovers, two of which occurred on the final two drives of the game to ice away the victory.

ISU's offense found its groove in the second half behind the rushing attack of Hall. Brock Purdy was 10-13 in the second half for 137 yards and tossed an 18-yard touchdown to Joe Scates. It was the first career touchdown for Scates, as well as his career long reception. Purdy finished the game 19-30 and 229 yards through the air.

At the half, it was locked at 14-14 between the Cyclones and Mountaineers. Iowa State scored on a pair of rushing touchdowns in the first half, one from Hall and one from Purdy. West Virginia jumped out to a 7-0 lead to begin the game on a pick-six and then closed the first half out with a 14-play, 76-yard touchdown drive to tie the game at the intermission.

Players of Note…
Hall was a work horse for the Iowa State offense. He found the end zone three times and is the first Iowa State true freshman rusher to eclipse 100 yards since David Montgomery went for 141 against West Virginia in 2016.

Cyclone Quick Hits
*La'Michael Pettway recorded a career-high eight receptions.
*Breece Hall rushed for a career-high 132 yards and three touchdowns. He is the first Iowa State true freshman running back to rush for over 100 yards in a game since David Montgomery.
*Brayden Narveson knocked a 45-yard field goal through the uprights. It was Narveson's first career attempt and make. It is also the longest field goal made by an Iowa State kicker this season.
*Braxton Lewis now has five career interceptions.
*Iowa State has recorded a sack in 18-straight games.
*The Iowa State defense has yet to yield a first-quarter offensive touchdown this season.

Up Next
Iowa State will be on the road at Texas Tech next Saturday at 11 a.m. The game will be televised by FS1.