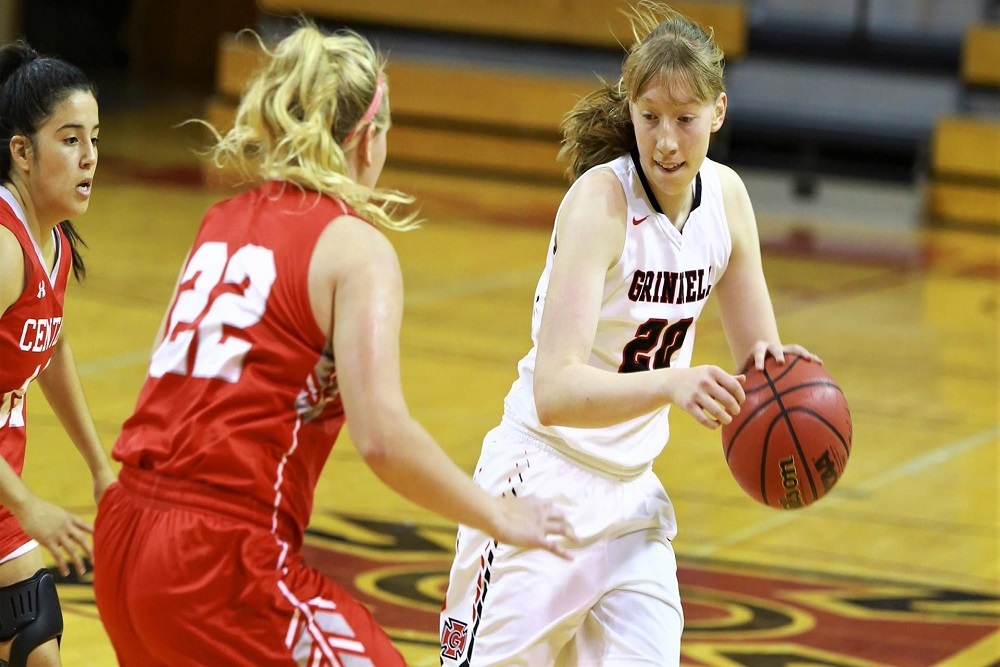 The Pioneers held off some big runs by Nebraska Wesleyan University to post an 84-78 win, ending an eight-game losing streak to American Rivers Conference competition dating back to 2015. Additionally, the Pioneers point total is their highest in nearly four years.

Tyria Heath '21 erupted for a career-high 24 points and Kathryn Stender '21 and Kate Tomczik '22 each had double-doubles as the Pioneers evened their record at 1-1. Stender had a career-best 19 points with the aid of 5-of-7 3-point shooting to go along with 10 rebounds, while Tomczik had 10 points and 11 boards. Sofia Ahooja '22 was also in double figures with 10 points.

The Pioneers used a 9-3 run to take command early in the first period, turning a 4-3 edge into a 13-6 lead. It was 19-13 at the end of the quarter before Nebraska Wesleyan came back in the second period, grabbing a 21-20 lead at the 7:41 mark. But then it was Grinnell's turn with a 10-1 run. Aidan Coalson '22 began the spurt with a basket, Stender sank consecutive 3-pointers and Heath added a layup to make it 30-22.

Grinnell went into the locker room with a 44-35 lead before the Prairie Wolves rallied in the third period, tying the game at 57-all. Ahooja scored three consecutive points to push Grinnell ahead 60-57 at the end of the quarter and began the fourth quarter with treys by Heath and Stender for a 66-57 edge.

Tomczik added a basket with just under a minute to go and Heath sank a free throw with 34 seconds left to secure the win. During Grinnelll's late run, the 0-1 Prairie Wolves missed four shots and turned the ball over once.

The Pioneers play their first home contest of the season Tuesday when Emmaus Bible College visits Darby Gymnasium for a 6 p.m. test.