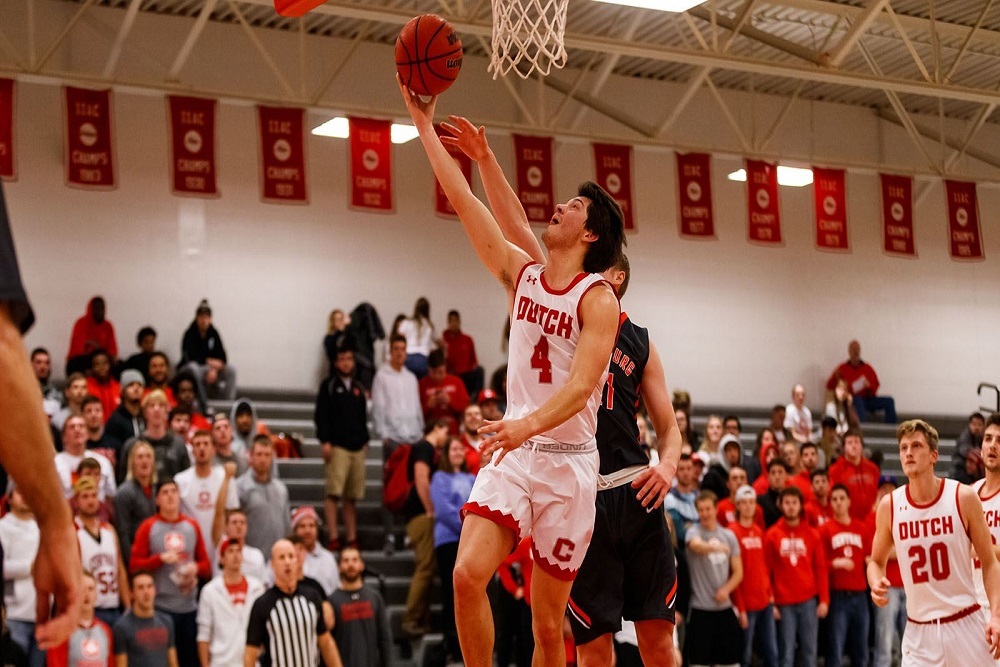 Mauck also had a career-high 18 rebounds while Flinn had seven boards with five assists.

The Dutch (4-4) got off to fast starts each half, but Bethany Lutheran's quickness melted the leads away. Central was up 21-12 just under the 10-minute mark, only to get outscored 19-4 and trail 35-25 6 minutes later before taking a 38-36 advantage into the break.

Bethany Lutheran sophomore guard Cire Mayfield, a conference MVP as a freshman, had 22 points despite being limited to 21 minutes of action due to foul trouble.

"I was very pleased, especially defensively, with how we got started in both halves," coach Craig Douma said. "I know they scored some points but Bethany is a really good basketball team and they can score. I just felt good about our defensive mindset. Our guys did a great job of executing."

"It gave Caden Mauck a lot of opportunities because he was isolated," Douma said. "It was great to see Caden step up tonight. You could see his confidence grow. He's developing. He's rebounding the heck out of the ball right now and he's finding ways to score."

Flinn was coming off a 29-point showing in a 92-79 win over Wartburg College Wednesday night.

"Adam was just being Adam," Douma said. "He made one of those big plays when we needed him to down the stretch. That was huge."

Others contributed in the clutch as well.

"Drake Johnson (freshman, Stanton) made some plays," Douma said. "I thought one of the plays of the game was when he made a steal and then went coast-to-coast and finished in traffic. That was a huge play. And Keaton Rodgers (freshman, Peoria, Ariz., Sandra Day O'Connor HS) hit a big three at a crucial part of the game. Those aren't normal plays that freshmen make.

"It was fun to see different guys step up for us down the stretch and make plays for us to get this win."

Central was playing without all-conference guard Jaden Moody (senior, Cambridge, Ballard HS), the team's lone senior, and is already without starting post Thomas Spoehr (sophomore, Bennington, Neb.). Moody was injured Wednesday and Spoehr was sidelined earlier. Neither is expected back soon. But the Dutch still held a commanding 45-31 rebounding advantage, including a lopsided 15-2 edge in offensive boards.

"You take an all-conference guard off the floor, a guy who's good for 17 or 19 points a game, you've got to find other ways to score," Douma said. "We had guys step up."

It was the fourth straight year that the Dutch have emerged with a win on the program's  Alumni Weekend.

"Alumni Weekend continues to be very special for us," Douma said.

Central closes its pre-Christmas slate Wednesday with a non-conference game at Grinnell College. The Dutch outscored Grinnell at Pella a year ago, 105-96, and holds a 10-2 lead in the teams' series. The Pioneers are 5-3 after racing past Knox College (Ill.) 115-93 and are averaging 117.8 points a game.

"We've got to get ourselves prepared," Douma said. "We'll have to play 10-12 guys so it's going to take a big-time team effort. We want to finish the pre-Christmas schedule the right way."