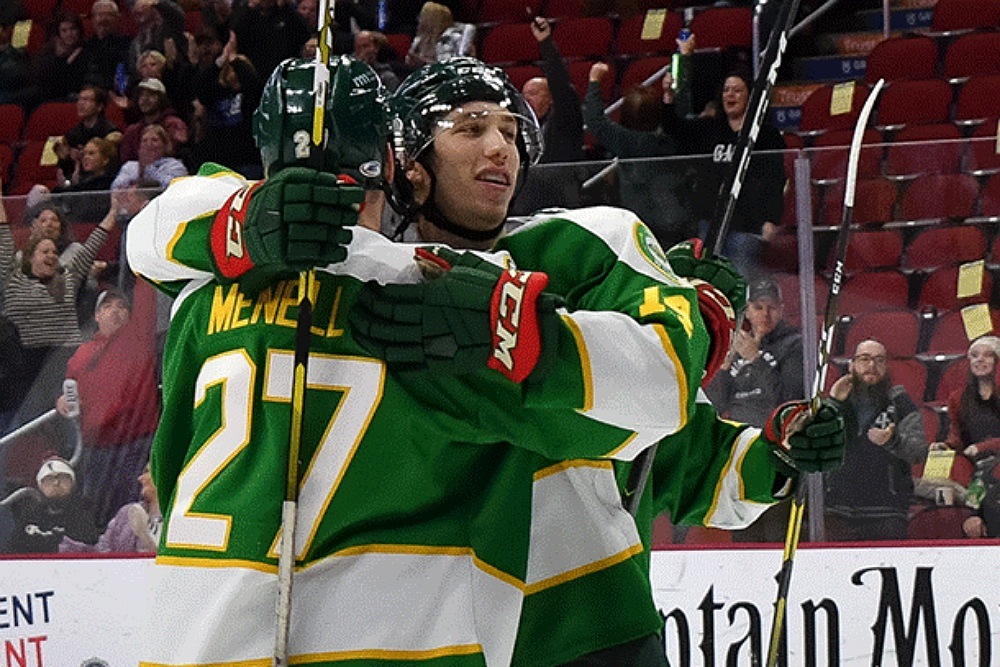 With less than a minute remaining in overtime, Griffins forward Taro Hirose skated in on goaltender Kaapo Kahkonen (31 saves) on a breakaway. He took a shot and Kahkonen made a kick save, springing forwards Gerry Mayhew and Dmitry Sokolov for a 2-on-1 the other way. In the attacking zone, Mayhew slid the puck to the left for Sokolov, who snapped a shot past the blocker of goaltender Pat Nagle (25 saves), clinching the 4-3 victory for the Wild.

Iowa opened the scoring at 7:34 in the first period as forward Will Bitten scored his sixth goal of the season. With the Wild shorthanded, forward Connor Dewar carried the puck in the zone on a 2-on-1 before taking a shot. Nagle made the save, but the rebound kicked right out to Bitten, who knocked it into the back of the net.

At the end of the first period, the Wild led 1-0 and the Griffins had a 12-9 shot advantage.

Grand Rapids tied the game 75 seconds into the second period on Hirose’s fourth of the season. On a 2-on-1, Hirose caught a pass from forward Matt Puempel inside the right circle and then wristed a shot past Kahkonen top shelf for the tally.

Just more than a minute later, the Griffins took a 2-1 lead. The Wild defense turned the puck over deep in the zone and forward Eric Tangradi beat Kahkonen underneath his left pad for the unassisted goal.

Forward Kyle Rau extended his point streak to eight games when he tied the game at 2-2 at 12:22 in the middle frame. Forward Colton Beck corralled a loose puck and sent a behind-the-back pass to Rau in the slot, who lasered a shot over Nagle’s glove for his sixth of the season. Defenseman Matt Bartkowski was credited with the secondary assist.

Grand Rapids once again took a 3-2 lead on a goal from forward Chris Terry at 9:01 in the third period. Terry took a shot from the top of the left circle that deflected off the skate of a Wild defender and up and over Kahkonen for his 13th of the season.

With the clock winding down, Bitten notched his second tally of the contest to even the game at 3-3 with 3:44 remaining in regulation. Just as a power play expired, Bitten one-timed a pass from defenseman Brennan Menell through Nagle’s five-hole for the score. Rau earned the secondary helper on the play, extending his assist streak to six games, and the tally was Bitten’s fifth goal and eighth point in his last five games.

With the score knotted at 3-3, the two teams headed to overtime, where Sokolov scored his fifth of the season to give the home team the 4-3 win.

Grand Rapids outshot the Wild 34-29 at night’s end. Iowa finished the contest 0-for-6 on the power play and 4-for-4 on the penalty kill.

With the win, Iowa moved into second place in the Central Division, leading the third-place Rockford IceHogs by a single point. Those two teams will meet in Rockford on Dec. 27 following the holiday break. Puck drop is scheduled for 7:00 p.m.