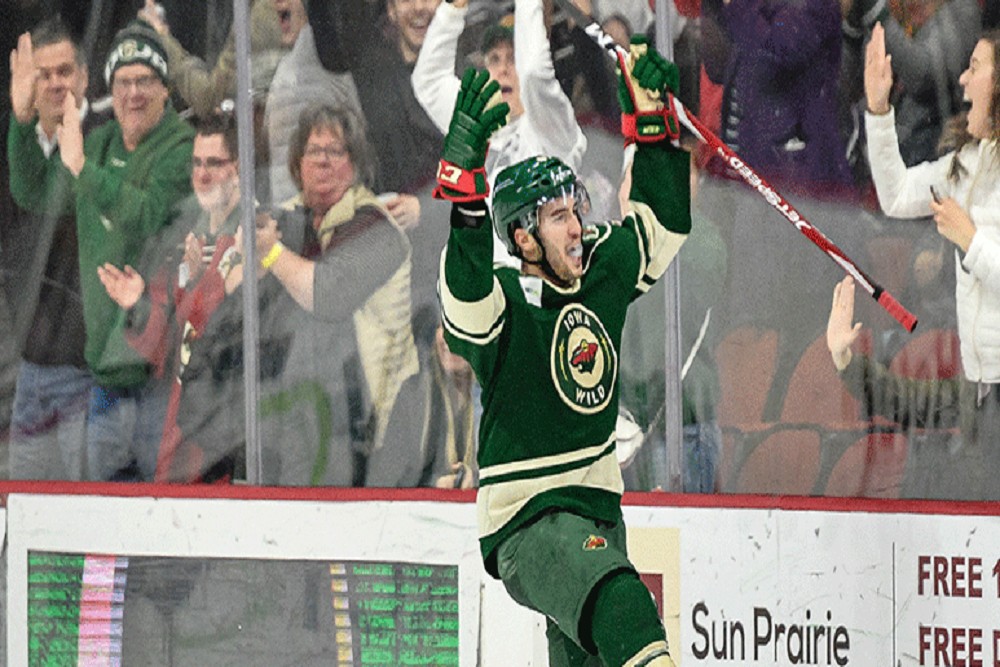 When Louie Belpedio’s backhand shot hit the inside of the San Jose Barracuda’s net Saturday night, the 10,928 fans in Wells Fargo Arena roared in deafening approval.

And for good reason, too. The goal helped the club successfully avoid losing a second consecutive game after entering the third period with a one-goal lead.

Make no mistake, Belpedio’s goal may go down as a critical point in the Wild’s 2019-20 drive toward making the Calder Cup Playoffs. Two losses to San Jose could have signaled the club’s second slide of the season at a critical moment with important division games approaching before the AHL All-Star break.

“That was a big two points,” Head Coach Tim Army said of Saturday’s game. “With Texas coming in on Monday and three more division games before the break, this would have been a pretty bad loss. As it was, Louie’s individual effort to score and the team’s willingness to compete made a big difference.”

Prior to Saturday’s 4-3 overtime win, no one was in a good mood. The 3-1 loss to San Jose Friday angered Army and put the team on the spot.

“You can't keep blowing leads,” Bartkowski said. “That's probably the worst thing you can do. We just got to buckle down and get it done.”

Bartkowski was only echoing Army’s thoughts, which he had shared Friday night and Saturday morning following the loss. Army called the outcome “unacceptable” and even suggested lineup changes would be made if the Wild had enough healthy players on the roster to do so.

He also said the club must respond much more aggressively to the kind of challenge that San Jose had presented Friday night.

One of Army’s chief concerns is that the Wild has found itself, as a result of injuries to veterans like Cody McLeod, Mike Liambas, and Hunter Warner, to be a team vulnerable to clubs that play a physical game.

“We need to be more physical,” Army said. “On the other hand, we need another type of physicality. We need to play inside the guts of the game. We need to possess the puck longer. We need to make them spend more time in their own end.”

On Saturday, despite falling behind 2-0, Wild players did just that. Rookies Brandon Duhaime and Josh Atkinson took fighting majors and the Wild’s forwards pushed hard to keep the puck inside the Barracuda zone. On Monday, Duhaime would square off with Texas’ center Oula Palve at center ice right after Kyle Bauman had tied the game 1-1.

But Army noted that in both games the Wild’s third and fourth lines stepped up to help provide the kind of pressure the team needs in the offensive and the neutral zones.

“I thought the Bauman line and the Dewar line were the best ones in both games,” Army said.

“It just shows the kind of resiliency we have,” he said.

J.T. Brown, who scored the game-winning goal against Texas, said the Friday loss had only inspired the team to improve their level of play on Saturday and Monday.

“We're not going to win every game,” Brown said. “So when we lost on Friday, we just wanted to make sure we had a bounce-back game. Then, today it's really good to continue the momentum.”

With three divisional games remaining before the All-Star break, Army said the team must focus on each contest, then be able to refocus on the next game. Teams are now fighting for playoff spots and that raises the intensity and preparation for each game.

“Today’s game was a lot like a playoff game,” Army said after the victory over Texas. “There wasn’t a lot of ice out there and both teams fought hard.”

Army said the team should expect the same from Grand Rapids and Manitoba – both teams outside the top four spots in the division but close enough to get there with a few wins.

“This was a big, big divisional win,” Army said. “But now we have to get ready for Grand Rapids.”