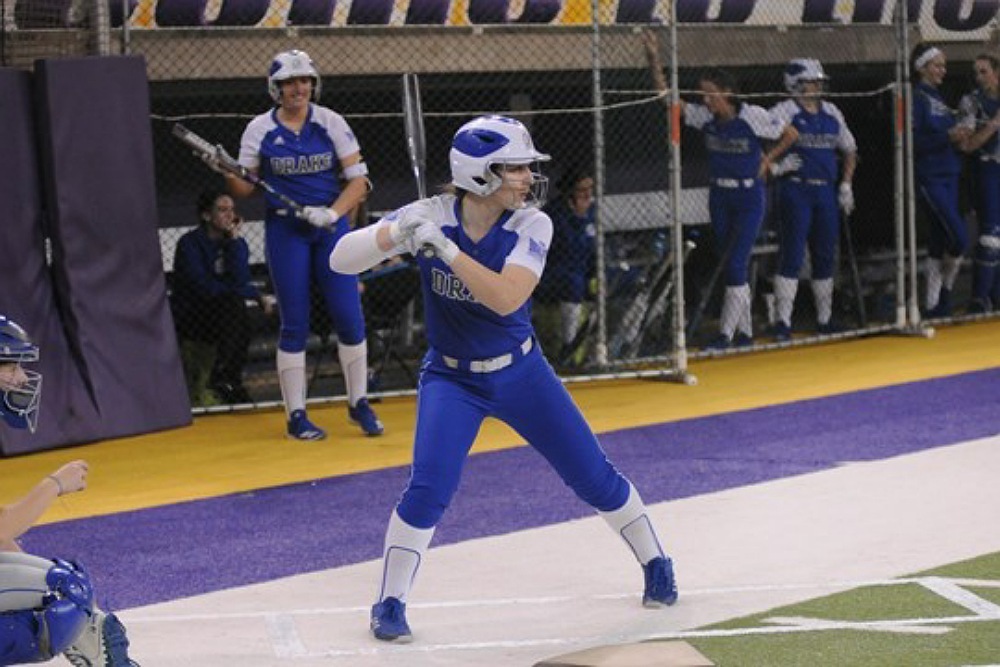 Drake jumped out to an early 3-0 first-inning lead over SDSU. A pair of freshmen, Delaney Taylor (Waukee, Iowa) and Emily Valtman (Newtown, Iowa), drove in the Bulldogs' run as Taylor drew a bases loaded walk and Valtman followed with a double that scored a pair.
Sarah Maddox (Henderson, Nev.) added another run in the second inning with a sacrifice fly.

Nicole Timmons (Davenport, Iowa) scattered five hits and allowed just one run with four strikeouts in six innings to improve to 2-1 in the circle. Freshman Makenzie Hupke (Independence, Iowa) bounced back after a rough debut against DePaul pitched one in relief of Timmons and allowed one hit with two strikeouts.

The Bulldogs put the game away with a three-run sixth inning and added one insurance run in the final frame.

Mandi Roemmich (West Des Moines, Iowa) was a catalyst in the leadoff spot going 2-for-4 with four runs and one walk. Macy Johnson (Winterset, Iowa) followed in the order and cracked three hits and drew two walks while Libby Ryan (Mount Vernon, Iowa) went 2-for-5 with a pair of run-scoring hits.

The Blue Demons allowed two runs in the top of the first inning off RBI singles by Johnson and Kristen Arias (Fresno, Calif.), but then scored six runs in the bottom of the frame. Hupke started in the circle but struggled in her debut getting just one Blue Demon out before being replaced by fellow freshman Allie Timmons (Davenport, Iowa). Hupke allowed six runs on three hits and walked four. Timmons pitched 6.2 innings of relief and allowed four runs (three earned) on six hits with four walks and seven strikeouts.

But Drake wasn't done as Taylor and Arias hit RBI singles in the sixth inning to pull within two runs, 10-8. Down to its last at-bat with two outs, Johnson ripped a double and Ryan followed on the very next pitch with a single up the middle to put runners on second and first for Maddox. Maddox came through with a clutch double down the left field line that scored the pair and tied the game, 10-10. The next hitter, Arias had a 3-0 count but struck out to end the threat. Allie Timmons retired the Blue Demons in order to send the game to extras. Drake got Arias to third from the tie-breaker ruler (runner placed on second to start inning) and a sacrifice bunt by Anderson, but the next two Bulldogs were retired. Abby Buie (Gardner, Kan.) moved to third in the ninth but was also stranded. DePaul finally broke in the ninth with the game winning hit by Scalzitti off Nicole Timmons, who pitched 1.1 innings in relief of her sister, Allie, and took the tough loss.

Drake closes its time in Cedar Falls, Iowa Sunday with a morning game against Murray State at 9:30 a.m. and a rematch with DePaul at 2 p.m.